Himurehachimangu Shrine is a shrine located in the center of Shiga Prefecture as a guardian god of the Omi region. It is said that the city name ‘Omihachiman’ is derived from the historical fact that Hachiman Okami has been enshrined in this place. The history of our shrine is also sung in ‘Himuremoude,’ the Noh play of the Kanze Noh School.

Legend has it that the establishment of the shrine dates back to A.D.131, when Emperor Seimu, the 13th emperor of Japan, was enthroned at the palace of Takaanaho, and he ordered TAKENOUCHI no Sukune to enshrine a tutelary deity Oshima no Okami in this place.

In 275, Emperor Ojin, the 15th emperor of Japan, paid a visit to Omi. Along the way, he had a rest at an imperial chamber set up near the present shrine. Later on, according to the legend, a mysterious phenomenon occurred that two suns were witnessed at the site of the Emperor’s temporary residence. The phenomenon was considered to herald an auspicious event. Then, a small shrine was built at this place, and the words meaning ‘multiple suns’ were given to the name of the shrine. As a result, the shrine came to be called Himurenoyashiro-hachimangu. 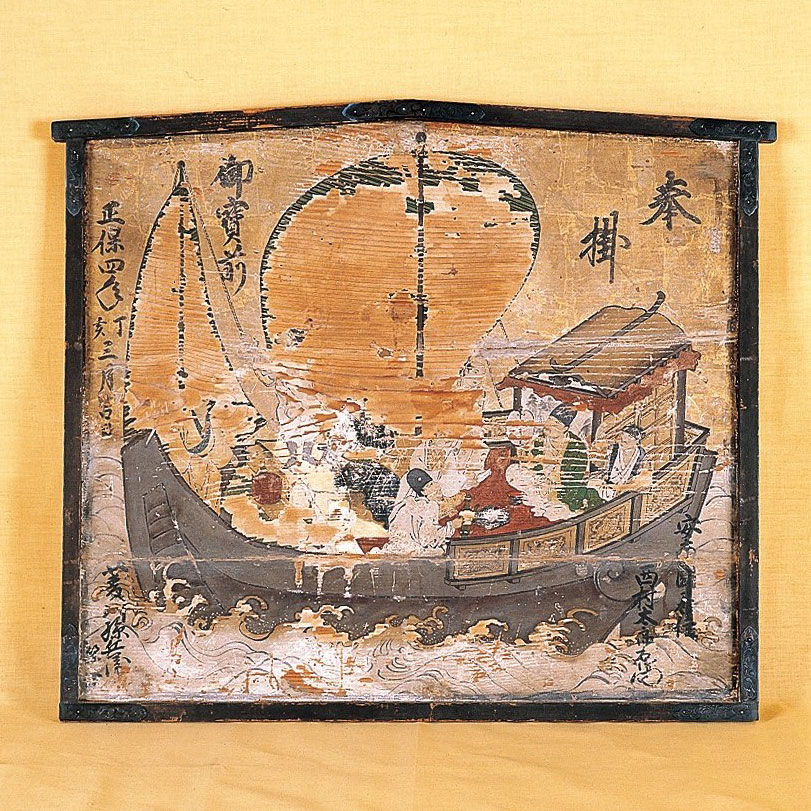 A merchant in Ohmi district, Taro-emon NISHIMURA who was the owner of “Annam ya”(Annam shop), was not allowed to come back to Japan after having made his financial fortune in Annam in Vietnam, because of shogunal national isolation policy. So, he ordered an artist to draw his portrait on a wooden plaque, and the plaque was dedicated to this shrine. It is now designated as a piece of Japanese important cultural property.

In 991, Emperor Ichijo, the 66th emperor of Japan, constructed a shrine in Hokkemine (Mt. Hachiman) and made a branch shrine of Usahachimangu Shrine (Kami no yashino) and built a shrine for worshiping on the foot of the mountain (Shimo no yashiro) in 1005.
In 1585, when Hidetsugu TOYOTOMI built Hachimanyama-jo Castle in this area, he merged Kami no yashiro into Shimo no yashiro. Although the castle was abandoned after Hidetsugu was ordered to commit hara-kiri, the castle town developed as the town of merchants, and Omi merchants appeared in the history. Omi merchants were said to have gone on business trips as far as Annan (present Vietnam) in the south and Hokkaido in the north. From around that time, our shrine began to be worshipped as a guardian god of Omi merchants.
It has been passed down that in 1600, Ieyasu TOKUGAWA visited the shrine after the decisive battle at Sekigahara and offered many donations to pray for long-lasting good luck in battles. 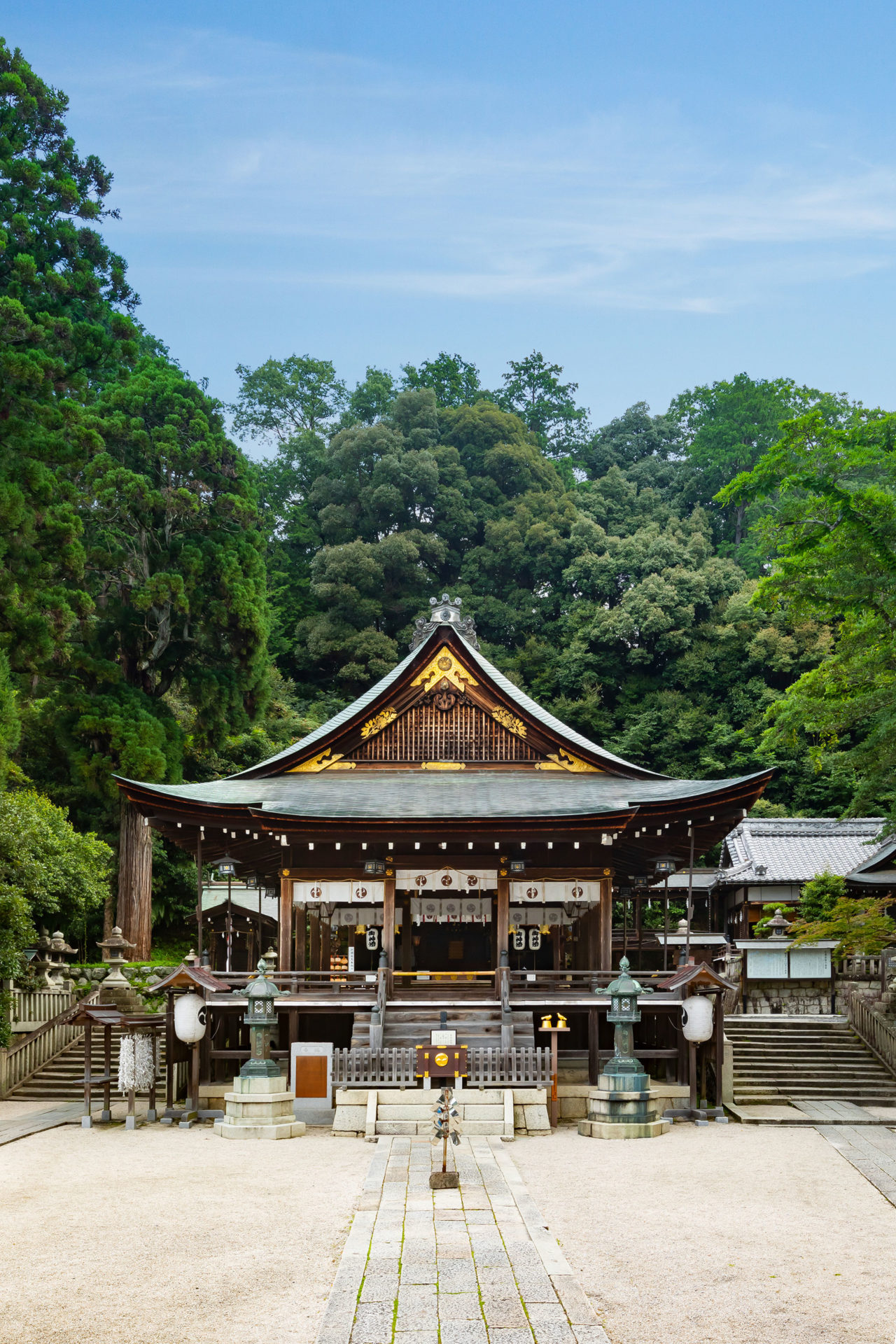 To this day, Himurehachimangu Shrine has been revered by the Imperial Household and the Shogun families. The shrine has been widely worshipped as a guardian god of Omi who gives the blessings of warding off evil and bringing in good fortune and prosperous business.

Our shrine holds a variety of annual events, such as the New Year’s festival, Setsubun (Bean-throwing) Festival, and Manto Festival. In particular, the Sagicho Festival in March and the Hachiman Festival in April each year are both well known as dynamic and gorgeous fire festivals of Shinto rituals that represent Shiga Prefecture. 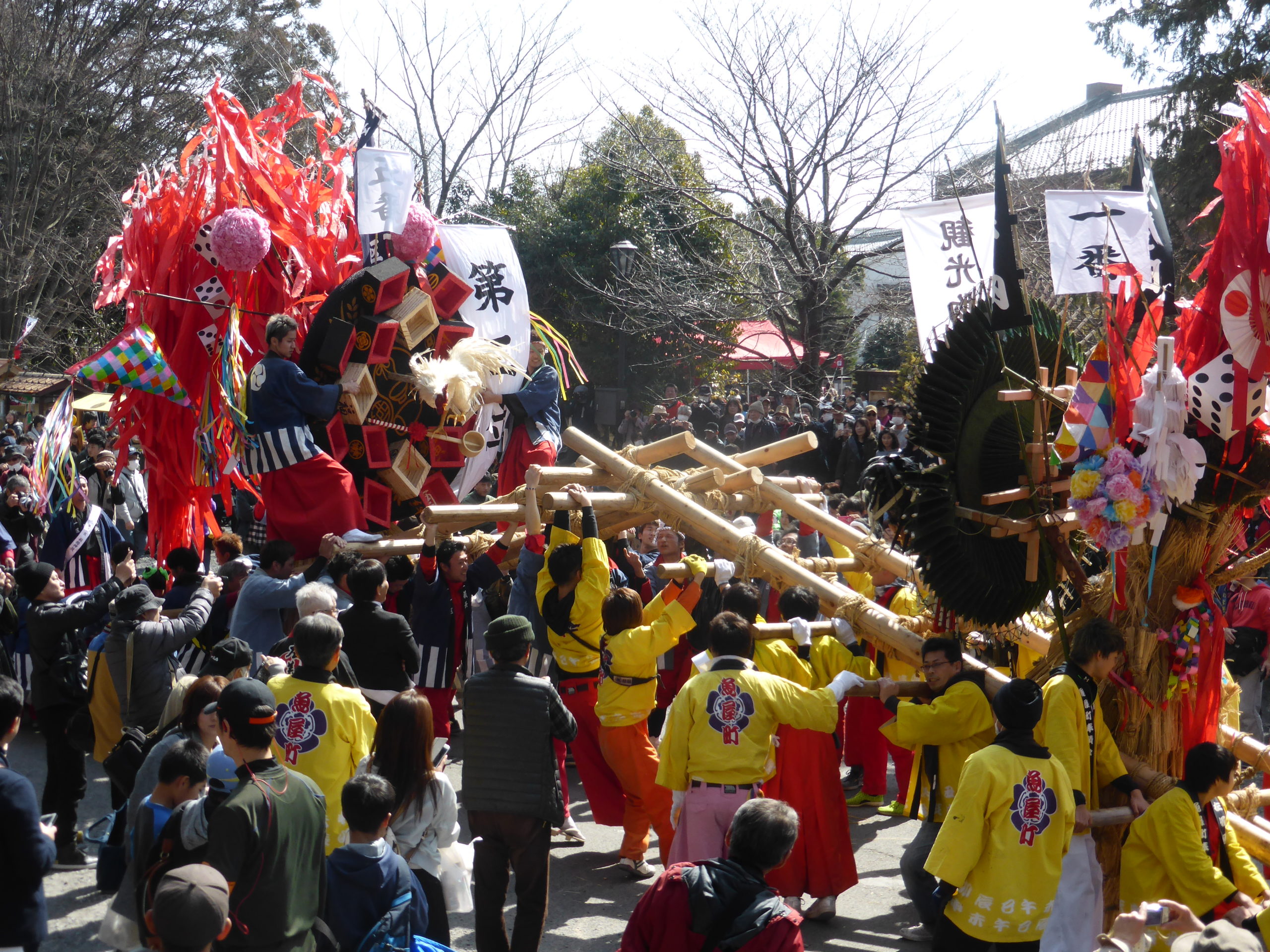 The Sagicho Festival at Himurehachimangu Shrine is held annually on the Saturday closest to March 14 and 15 (no postponement for rain). Sagicho is a New Year’s festival that originally came from China. In Japan, the festival is held as a festival to pray for peace and security of the country and good harvests. 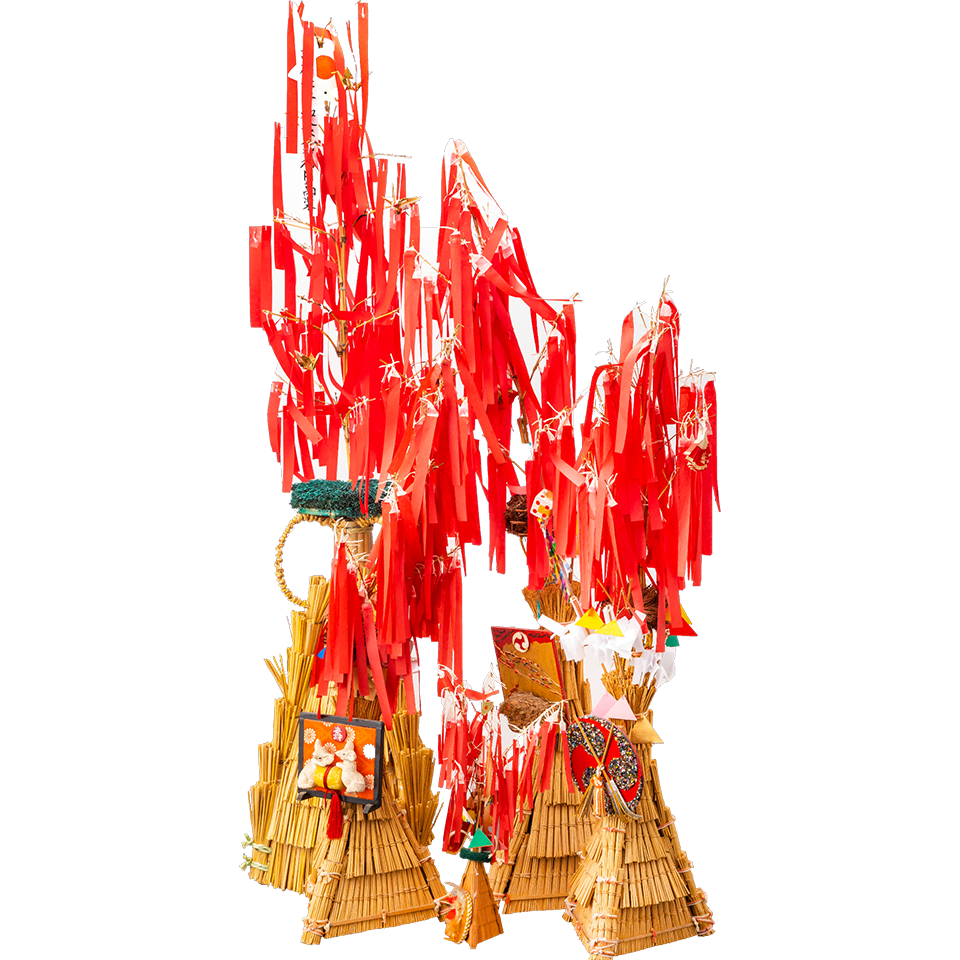 The body of the Sagicho is formed by beautifully stacking new straws in 12 tiers. A trigonal pyramid-shaped torch of about 3 meters high and the head of cedar leaves are attached to it. On the top of it, green bamboo poles are installed with decorations of reed-shaped red papers, fans, or decorative paper balls.
On the top of the head of cedar leaves, a Gohei called ‘Hinobori’ is attached. When setting a fire on the Sagicho, which is the culmination of the festival, it is a custom to set a fire to this Hinobori first. 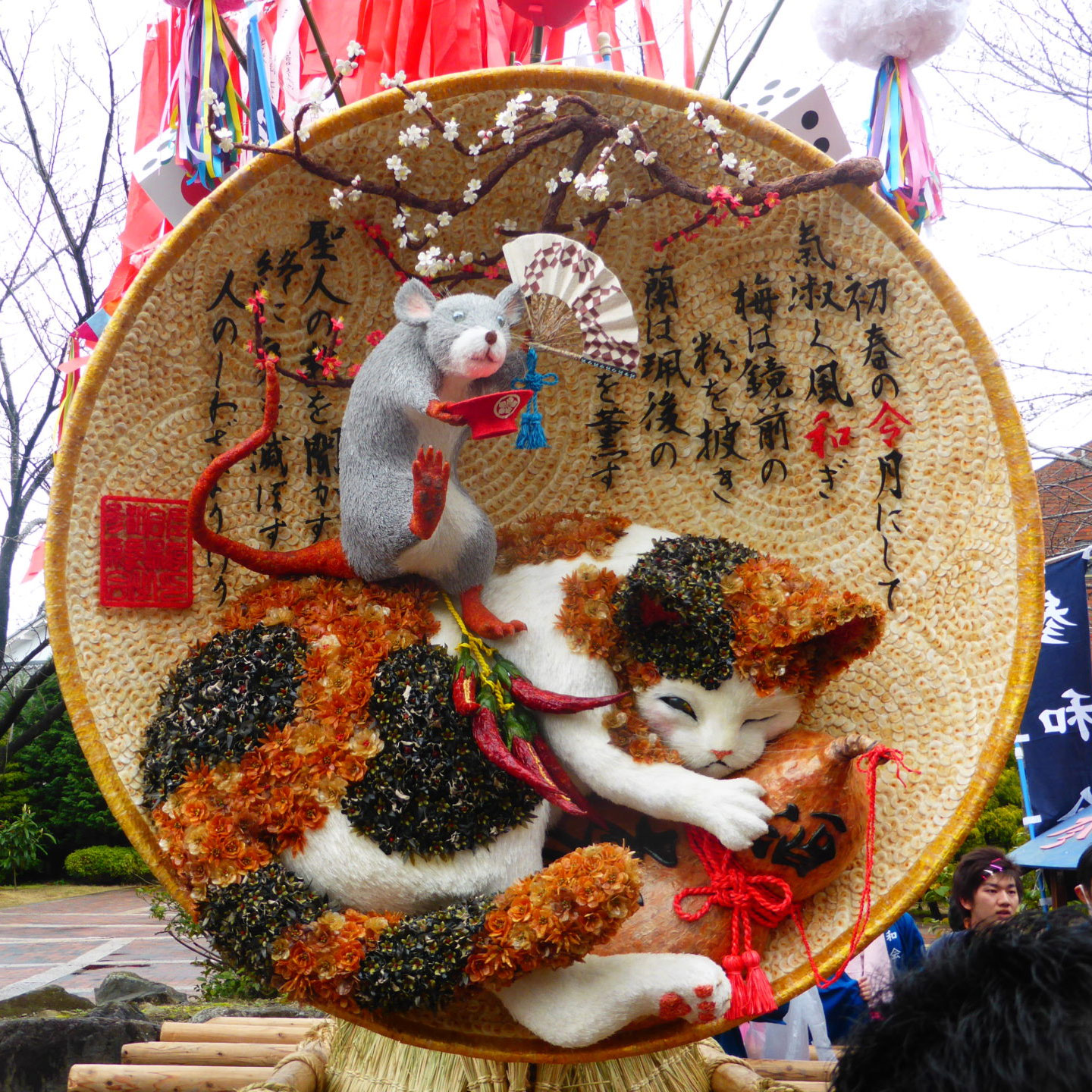 The center front of the Sagicho is decorated with ornaments called ‘Dashi.’ Every year, each town comes up with a theme associated with the Oriental zodiac of the year or the current state of affairs. Dashi is created from cereal crops, marine products ,or local specialties by making use of their natural colors. Each town employs ingenuity to vie for the best Sagicho of the year regardless of expenses.

On Friday, Mikujisai (lottery ceremony) is held to decide the parade order of the floats.
Around noon on Saturday, all Sagicho from each town get together in the order of the parade, and they are carried through the former downtown in a procession. Bearers of the Sagicho are called ‘Odoriko.’ Wearing uniform odorihanten (a short coat for festivals) and dressing up beautifully, they carry the Sagicho floats and parade on the streets with Hyoshigi (wooden clappers) in their hands and Geta with a red and white colored strap on their feet, livelily calling out to each other, “Chousa, Yareyare” “Chouyare, Yareyare.” After returning to the shrine, the result of the Sagicho floats contest is announced, and the awards ceremony takes place.

On Sunday morning, a festival is held at the main hall. In the afternoon, each Sagicho float is carried through the former downtown freely and arrives at the precincts of the shrine around sunset. In the order predetermined by lottery, a fire is set at each Sagicho for dedication to the gods. All Sagicho burst into flames one after another, and the riding ground of the shrine turns into a sea of fire. Surrounded by cheers and dances, people’s prayers flame up in the night sky of early spring. 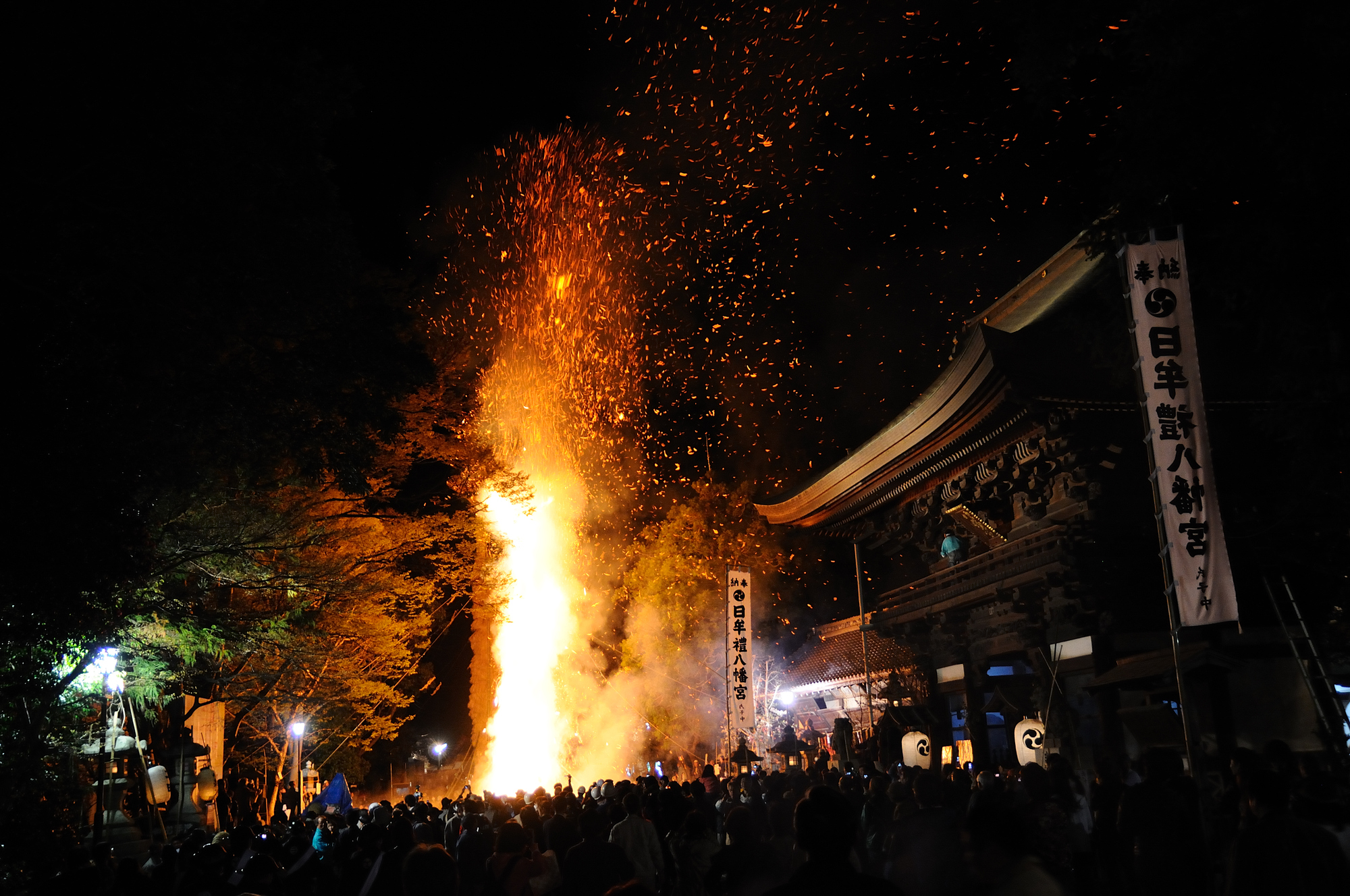 When Emperor Ojin paid a visit to Omi, the birthplace of his mother, Empress Jingu, he crossed Lake Biwa by boat. It is said that disembarking at the beach of Minamitsuda no hama near the shrine, villagers living in seven houses nearby made torches from reeds on the lakeside and guided the Emperor to Hachiman with the lit torches. This episode is said to be the prototype of the Hachiman Festival. This festival is the traditional festival that has been taking place since 275, going back in time one thousand several hundred years. 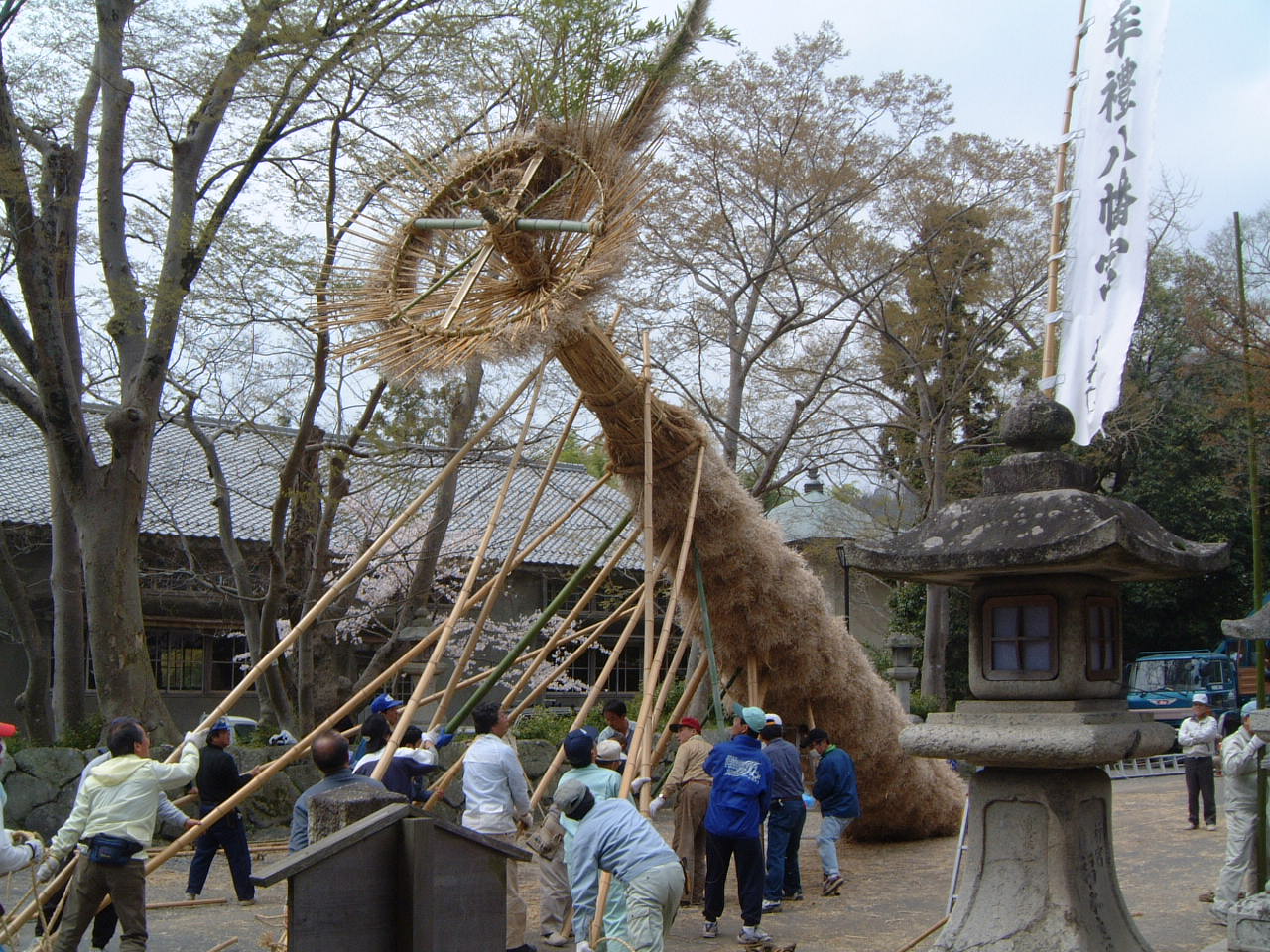 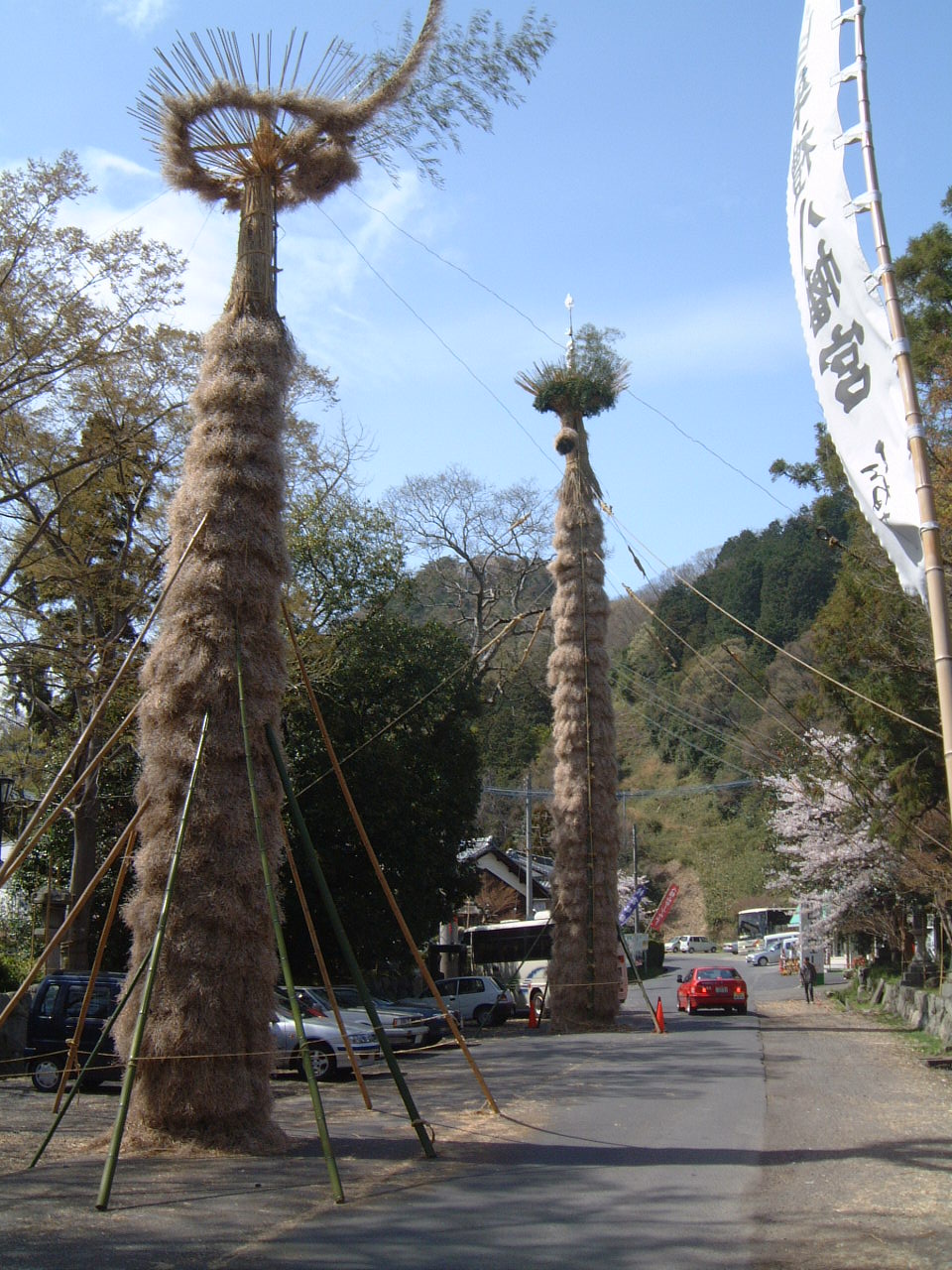 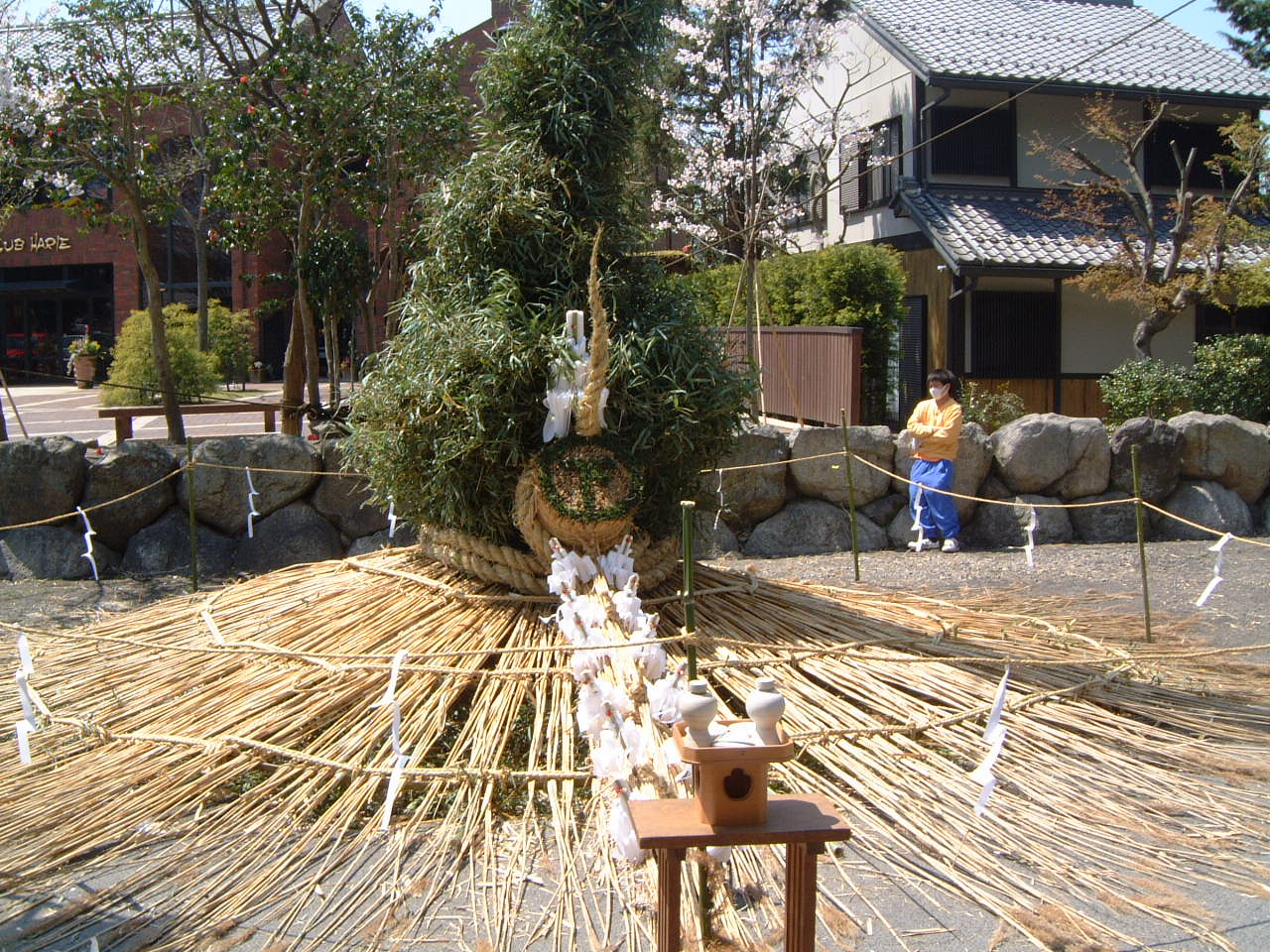 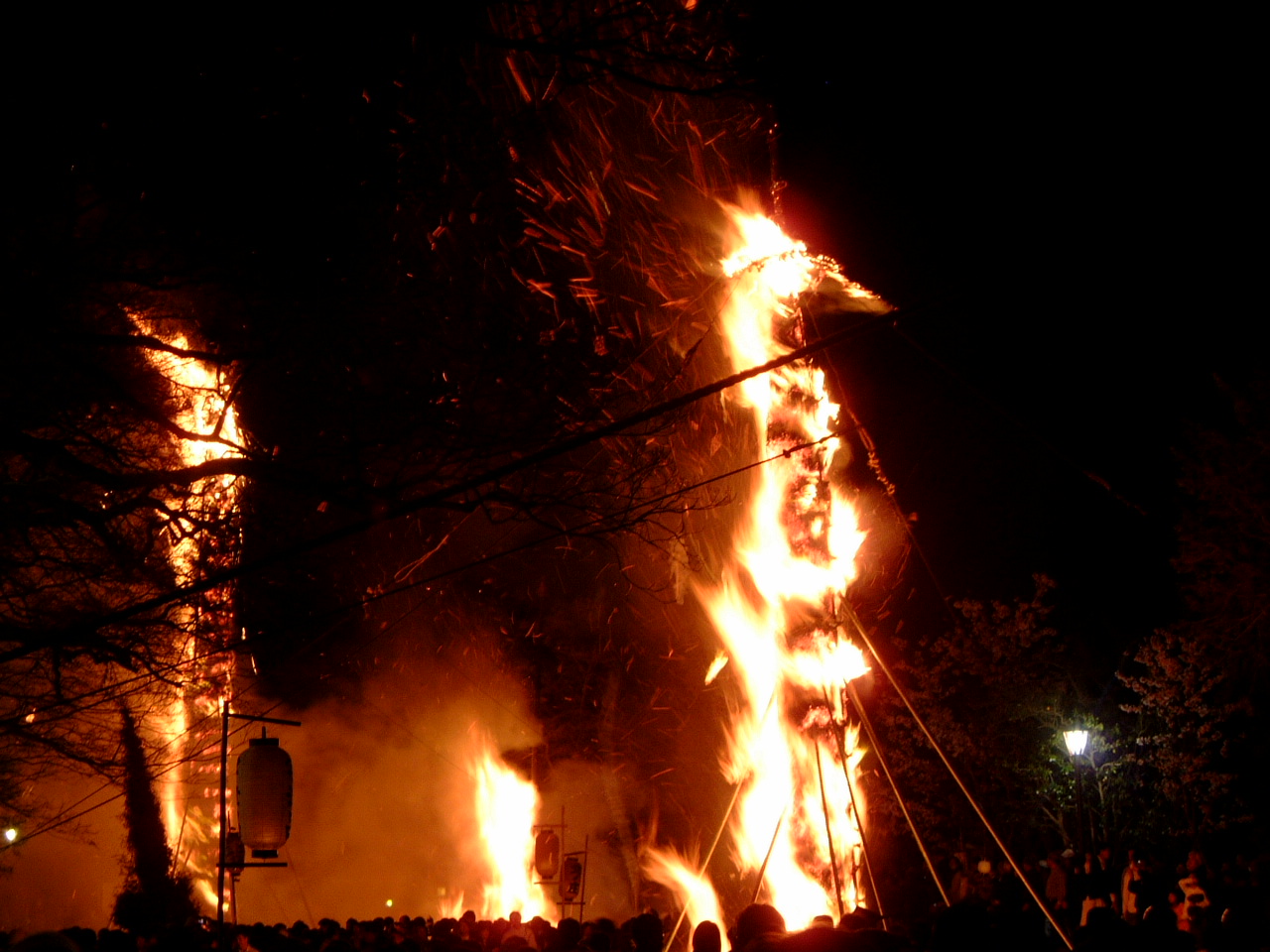 Twelve former villages (Gō), which inherit the tradition of time-honored shrine parishioners, serve at the Hachiman Festival. The names of each Gō at that time are the origin of the names of present towns.

Among torches used in the Yoimiya Festival, there are several large torches of more than 10 meters high. A total of nearly 200 torches are made, including torches brought in at the rites and festival. In the center of the riding ground, two large torches (bamboo grass torch) are set up. The large torches are the shinza (the seat of the deity) made of bamboo grasses and bamboos in a strikingly gorgeous and beautiful manner.

The Yoimiya Festival held on April 14 is also called the Torch Festival. Around 6 p.m., people from each Gō carrying drums take their place in the riding ground. Around 8 p.m., as a set piece of fireworks elaborately crafted by Gō signals the start of the festival, torches are lit one after another in the traditional order.

Between the Yoimiya Festival and the Main Festival, a golden portable shrine is decorated in the hall of worship. At the end of the Yoimiya Festival after the torches are lit up, a Shinto ritual ‘Maijara’ is held before the portable shrine, and another ritual ‘Kezurikake’ is held before the main hall. Then, a pike for large drums used for the Main Festival (Drum Festival) in the parade order is handed over to a kamiyaku (person who plays a role as a deity) of Oya-Gō. 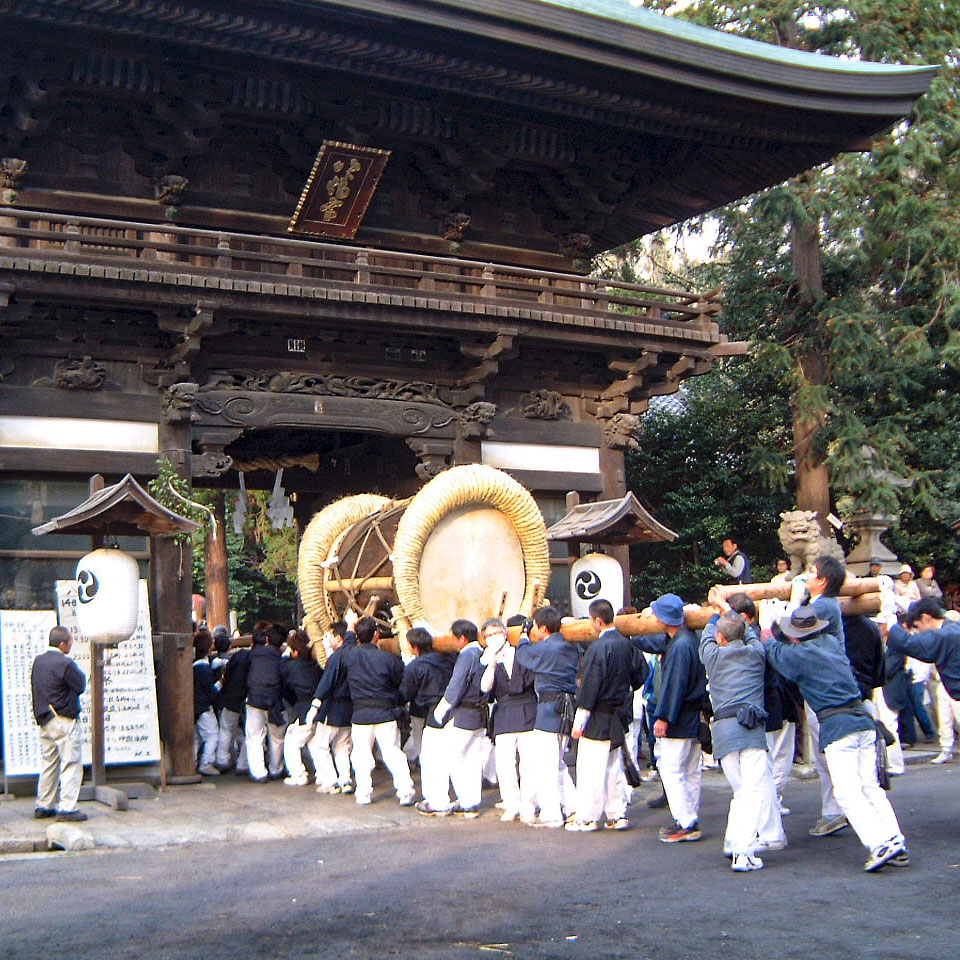 In the Main Festival (Drum Festival) held on April 15, a Shinto ritual (annual festival) is held in the morning at the main hall with the attendance of a kenpeishi from the Association of Shinto Shrines. Around 2 p.m., people from each Gō gather at inns near the shrine. From around 4 p.m., large drums following the pike handed over to Oya-Gō at Yoimiya start to parade to the shrine. With the kamiyaku in the lead, young men line up in order and parade to the shrine while carrying a large drum, the pride of each Gō, over their shoulders, shouting “Dokkoishānse.”

When a procession for ‘watari’ (the parade) arrives in front of the hall of worship, young men hold a large drum weighing several tons up high and strongly hit it three times as a dedication to the gods of the shrine. This is called ‘Shūshi’ (worshipping). With one accord, shrine parishioners of Gō raise their hands up in the air in unison, and their appearance further enhances the divine virtue of the god Hachiman.